Located in western Sichuan Province and adjacent to Tibet, Qinghai, 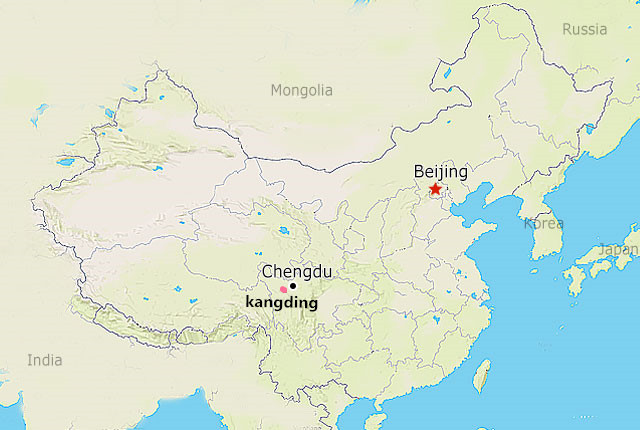 and Yunnan Provinces, Ganzi Tibetan Autonomous Prefecture covers an area of 153,002 square kilometers and has Kangding as its capital. Under its jurisdiction are eighteen counties: Kangding, Danba, Dege, Xiangcheng, Shiqu, Daocheng, Sertar, Batang, Luding, and Derong.

Ganzi Tibetan Autonomous Prefecture is one of the three ethnic autonomous prefectures in Sichuan Province. It is situated at the edge of the Qinghai-Tibetan Plateau, and has many famous mountain ranges and rivers, such as Mt. Gongga, Jinsha River, Dadu River, and Yarlong River. All the snowy mountains, plateaus, valleys, and grasslands have created many natural splendid scenic areas, making the region unique and colorful. It is also rich in natural resources such as forests and mineral deposits.

The typical climate here is like that of the Qinghai-Tibetan Plateau and varies with differences in altitude. It is characterized by low temperatures, long winters, little rainfall, and abundant sunshine.

The economic activities in this prefecture vary in different areas, from farming on the plains and river valleys to animal husbandry on the highlands. The forest areas abound with rich timber resources, medicinal herbs, and wild plants and animals. Economic development has proven easier in the areas along the Sichuan-Tibet Highway and the Yunnan-Tibet Highway. Other highways connect the eighteen counties of the prefecture.