Guilin  is  located in the northeastern part of the Guangxi Zhuang 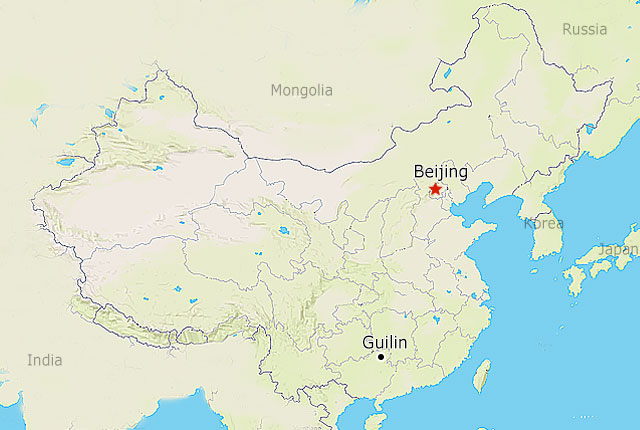 Autonomous Region. The city has long been famous for its limestone karst scenery. About 200 million years ago, oceans receded from this area and Karst hills sprouted from a patchwork of paddy fields and flowing streams. The huge geological processes created a fantastic, seductive scenery that attracts people home and abraod to expore its beauty.

In the city proper, a few hills are dotted here and there in Guilin, but the Li River cruise from Guilin to Yangshuo is the top attraction. Withe the rapidly developing tourism,  Guilin has also become touirst hub to  visit the Zhuang, Yao , Miao, and Dong minority villages to the northwest of Guangxi Automonous Region.
The main road of Guilin is Zhongshan Road in which is parallel to the Li River. On both sides of Zhongshan Road are Banyan Lake(Ronghu) and Fir Lake(Shanhu) respectively, the lakes are naturally merged with beautiful parks. To the north Solitary Beauty Peak stands at the north part of the city,  which boasts Guilin's most prominent karst peak. Along the Li River are two more peaks, Fubo Hill  and Elephant Trunk Hill, both of them are the symbols of Guilin's unique scenery. Other popular attractions ate the Seven Star Park with seven peaks and six caves to enjoy. Lastly, on the northwestern outskirts of town is Reed Flute Cave, a limestone cave in the area, nicknamed as "Natural Art Gallery".