Fubo Hill stands solitarily in the northeast of Guilin city  on west bank of Li River. Part of the hill stretches into the river. The waves of Li River run back when they hit the blocks, hence the hill got the name "Wave-Taming Hill". Actually, the hill  is only 120 meters long, 60 meters wide and 213 meters high.

The Pearl-Returning Cave (Huangzhu dong) is located on the southern slope of the hill. Inside Pearl-Returning Cave , a rock  hangs from the ceiling and almost touches the ground. Legend has it that the General Fubo (a general named Ma Yuan of China Han Dynasty) once tested his sword by cutting what was originally a stone pillar and has left a crevice at the bottom ever since. Walking to the end of the cave, you will reach  the Thousand-Buddha Cave.  About 250 Buddhist statues and  100 inscriptions were carved  on the rocks. Most of the statues were carved in Tang and Song dynasties, over 1000 years ago. On the western side of the cave, a small path made of stone steps will lead visitors to Kuishui Pavilion and then to the top of the Hill. On the summit visitors can have a bird's-eye view of the Li River. 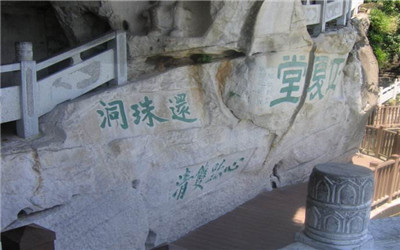 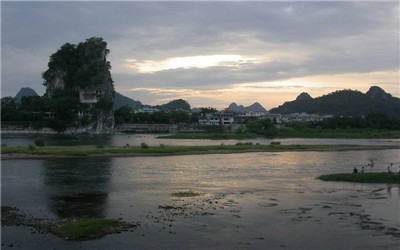