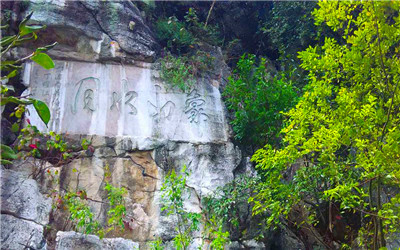 for its unique shape of a giant elephant stretching its trunk to Li River and boozing. In 1995, Elephant Trunk Hill became the badge of Guilin and the first attraction in the 100 Km Li River for its magical Karst landform and featured scenery. Visiting the Elephant Trunk Hill Park, we can enjoy green mountains, crystal clear water, fantastic caves and beautiful rocks.  The most popular attractions include Water Moon Cave, Elephant Eye Cave, Puxian Pagoda, and Yunfeng Temple.

The Water Moon Cave is located between the trunk and body of the elephant, it is a round cave where the river flows through. The cave covers about 150 square meters, 17-meter-long, 9.5-meter-wide and 12-meter-high. Resembling a full moon, it matches with the Moon Cave in Chuanshan Park (south of Elephant Trunk Hill with higher altitude) harmoniously, one hanging above and one floating on the water, forming a wonderful picture of Twin-Moon in Li River. With over 50 stone inscriptions on the wall of the cave, Water Moon Cave is regarded as the key cultural protection unit in Guangxi. From these stone inscriptions, you can have a glimpse of the history of the Taiping Heavenly Kingdom. 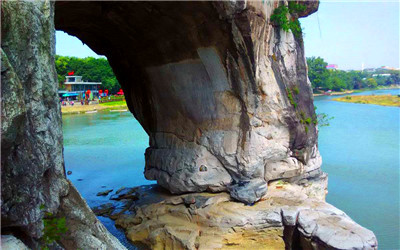 Climbing up the Elephant Trunk hill, you will find another cave connecting south and north eyes of the huge "Elephant".  It is named Elephant Eye Cave, once to be a river channel and then sculptured to a cave for the erosion and weathering of wind, rain and sun. Standing in the south eye, you can enjoy the panoramic view of Guilin. Looking afar from the north eye gives you another feeling: the Li river shows you a perfect sight of the Chinese ink-and-wash painting with sails and waves on the river. Walking up the stairs from south eye of the "elephant", you can get to summit of Elephant Trunk Hill.

First built in Ming Dynasty, Puxian Pagoda is a 16.3-meter-high solid brick pagoda in Tibetan Construction style. On the pagoda's  north side, the figure of Puxian Bodhisattva and characters “Namo samantabhadra bodhisattva”was carved. 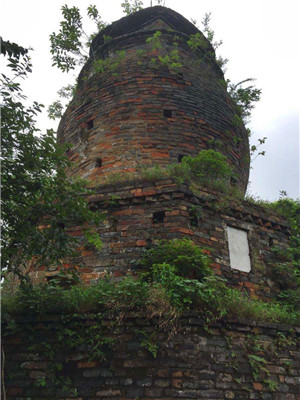 Puxian is one of the four bodhisattvas in Chinese Buddhism, distinguished for virtue. In whole China, Puxian Pagoda in the Elephant Trunk Hill is the only pagoda enshrining and worshiping Puxian except for Mount Emei. In the peak of Elephant Trunk Hill, the construction of Puxian Pagoda coincides with what is depicted  in Buddhism that Puxian always shows upon riding an  elephant. Elephant symbolizes good fortune, so an elephant carrying a pagoda means peace and happiness.

Yunfeng Temple was built in Tang Dynasty. It is historic for the Taiping Heavenly Kingdom in late Qing Dynasty when the temple was used as the command post of Taiping Heavenly Kingdom. The kingdom was established by the peasant uprise originating in Jintian，Guangxi province， which is very close to Guilin. Historical records confirmed that Taiping Army encompassed Guilin on three sides and occupied Elephant Trunk Hill after their breakout from Yong'an. In the peak of the hill, they had a storming fortification and bombarded the Qing Army seriously. The ancient Puxian Pagoda has witnessed the courageous and prudent Taiping heroes.