The Old Town of Lizhuang, situated in Yibin county, has a history going back over 1800 years.

In the movement to reclaim wasteland, set up by the Qing Government,  people from far and wide came here. With an area of less than one square Km, there are ancient buildings to be seen: palaces and temples in 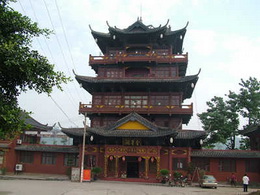 classical styles, traditional courtyards with houses on four sides, and narrow streets paved with blue stones. In the past, the townsfolk revered the quality of virtue and advocated high moral principles.

The 1st record of the Town of Lizhuang was during the War of Resistnce against Japan. In the town, the residents willingly invited and received many anti-Japanese patriots from other places, so showing off their patriotic passion. During these difficult years, Lizhuang preserved and developed the national culture. At that time, it was one of the four major cultural central with Chongqing, Kunming and Chengdu. The Central Museum and the Tongji University were scattered around the palaces, temples, guildhalls and even the residences. On the wall of a small courtyard, there is still a board with the words 'the Institute for Research in Chinese Architecture,' an academic organization for ancient Chinese architecture. It was founded in Beijing in 1929 and moved to Lizhuang during the War. In 1931, Liang Sicheng,  a great modern Chinese architect, joined the organization. With his wife, Linhuiyin (an architect and poet), his daughter and his son, Liang moved to Lizhuang, where the institute was located. They led a simple and busy life. In 1942, Liang began to write a History of Chinese Architecture there. After the War, the old town became a quiet place once again. 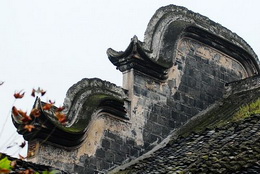 In recent years, with the opening up of China, Lizhuang has become the focus of attention again. A History of Chinese Architecture and a Pictorial History of Chinese Architecture, issued respectvely in 1988 and 1984 were completed in Lizhuang in 1943. Both works are of paramount importance for anyone conducting research into Chinese architecture. Li Ji, a historian and archaeologist, published an article about more than 200 thousand pottery pieces unearthed from some Yin Dynasty ruins in Lizhuang. Wang Shixiang, a connoisseur of cultural relics and and important collector, published a collected works Jinhuidui, in which there are three articles completed in Lizhuang and one about the Song Dynasy (960-1127) tombs. Besides these, there are many other outstanding characters, for example, Luo Ergang, writer of The History of Taiping Heavenly Kingdom, and Li Lincan, the father of Dongba culture.