occupying an area of 41 acres and 1,200 meters (0.8 miles) above sea level, this stronghold is the largest observing spot of the forest park. One cannot claim to have completed a Zhangjiajie National Forest Park tour without visiting Yellow Stone Stronghold. If you have enough time, watch the marvelous sunrise here.The main attraction spots include Tranquil Trail in Fir Woods, Imperial Edict and the Precious Box, Needle Peak, the Southern Gate to Heaven, Five-Finger Peak and so on.

It is famous for its pristine water,  verdant mountains, steep cliffs and its serene valley. As a veritable "paradise" for plants, its pathways are adorned by an abundance of flowers, trees, and grasses. Sceneries along the Golden Whip Stream are most enchanting in the Zhangjiajie National Forest Park. Named after the Golden Whip Rock which it flows by, this stream, 5.7 kilometers long (3.5 miles), joins the Lute stream in the west and Suoxi Stream in the east. A 300-meter (984 feet) walk from the gate of the park will lead you to the entrance of the Golden Whip Stream. Flanked by ridges and peaks, the crystal clear water makes it possible to observe every action of the fish in the water. Wild flowers are in abundance here. 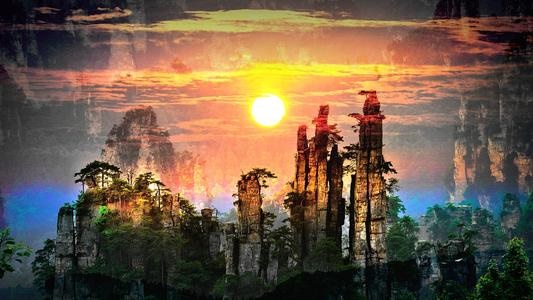 The northern part of the Zhangjiajie National Forest Park is the essential tourist route. Yuanjiajie is a natural platform that faces giant rocks rising from deep valleys and surrounded by higher mountains. Unique in their shapes and covered with pine trees, these rocks form a vivid Chinese painting.It's main attraction spots include: Back Garden, breath taking Mihun Stage, the First Bridge under the Sun and Avatar Hallelujah Mountain (previously called Southern Sky Column). The director and production designers of Avatar were inspired by the photos of Southern Sky Column and then designed Na'vi people's home Hallelujah Mountain in the film. In January of 2010, the Southern Sky Column was renamed to its current name.

The weather belongs to the sub-tropical climate of Central Asia. Splendid mountains and luxuriant trees help form a favorable climate: warm in winter and cool in summer. The average temperature all year is 13℃ (55F), the highest is around 17℃ (62F ) while the lowest temperature reaches to 10℃(50F)  in winter. The charm of the park varies with the alternation of seasons; therefore, it attracts visitors all year round. Besides, the dust particles in the park are 88% lower and the air 10% mistier than outside,and also provide visitors a chance to breathe healthy and rich in negative oxygen air. It is also believed that hypertension patient may have their blood pressure lowered if they stay in the Zhangjiajie National Forest Park for a period of time.

About 98% of the area is covered with plants. There are 720 species of the 102 families, including+ five most important floras, namely, the rose family, pulse family, grass family, composite family and orchid family. Some of these trees are rare and regarded as national treasure. For example, the Dove tree, known as living fossil, can be traced back as early as the Fourth Ice Age. The great variety of plants in Zhangjiajie National Forest Park takes up 82% of all the flora families in Hunan Province.

Zhangjiajie National Forest Park also boasts a variety of animals. Exuberant forests offer them ideal habitats to live in and procreate their own species. There are more than 149 kinds of chordate animals inhabitants in this park. Among them, 28 kinds are under national protection, amongst which, are the Golden Pheasant, Rhesus Monkey, Giant Salamander and Musk Deer.

Get to Zhangjiajie National Forest Park

Zhangjiajie Central Bus Station (near Zhangjiajie Railway Station) has regular tourist buses to Wulingyuan every a few minutes and the bus journey takes about 40 minutes. Bus fare is around CNY 12.

There are hotels and inns in the park and near the Wulingyuan Entrance, most of which do not provide toiletries. A standard double-bed room costs CNY 300 or so. Suoxi Shanju Light Luxury Resort Hotel is a good recommendation.

Free entry for children below 1.3 meters but they need to pay CNY 65 for the battery car.

2. Tourists can pay CNY 3 to buy the insurance.

Ticket prices for other attractions: